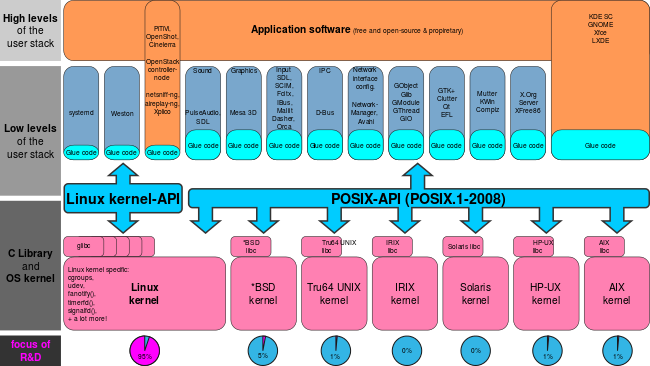 This diagram shows a comparison of the Linux kernel API with the POSIX API.

An application programming interface (API) is a particular set of rules and specifications that software programs can follow to communicate with each other. It serves as an interface between different software programs and facilitates their interaction, similar to the way the user interface facilitates interaction between humans and computers. An API can be created for applications, libraries, operating systems, etc. as a way of defining their "vocabularies" and resource request conventions (e.g. function-calling conventions). It may include specifications for routines, data structures, object classes, and protocols used to communicate between the consumer program and the implementer program of the API.[1][2]

An API can be:

API may be used to refer to a complete interface, a single function, or even a set of APIs provided by an organization. Thus, the scope of meaning is usually determined by the context of usage.

An API may describe the ways in which a particular task is performed.

In procedural languages like C, for example, the action is usually mediated by a function call.

The behavior of the functions is usually described in more details in a human readable format in printed books or in electronic formats like the man pages: e.g. on Unix systems the command

will present the signature of the function sqrt in the form:

That means that the function returns the square root of a positive floating point number (single or double precision) as another floating point number. Hence the API in this case can be interpreted as the collection of the included files used by the C language and its human readable description provided by the man pages.

Most of the modern programming languages provide the documentation associated with an API in some digital format that makes it easy to consult on a computer. E.g. perl comes with the tool perldoc:

python comes with the tool pydoc:

ruby comes with the tool ri:

In object oriented languages, an API usually includes a description of a set of class definitions, with a set of behaviors associated with those classes. A behavior is the set of rules for how an object, derived from that class, will act in a given circumstance. This abstract concept is associated with the real functionalities exposed, or made available, by the classes that are implemented in terms of class methods.

The API in this case can be conceived as the totality of all the methods publicly exposed by the classes (usually called the class interface). This means that the API prescribes the methods by which one interacts with/handles the objects derived from the class definitions.

More generally, one can see the API as the collection of all the kinds of objects one can derive from the class definitions, and their associated possible behaviors. Again: the use is mediated by the public methods, but in this interpretation, the methods are seen as a technical detail of how the behavior is implemented.

For instance: a class representing a Stack can simply expose publicly two methods push() (to add a new item to the stack), and pop() (to extract the last item, ideally placed on top of the stack).

In this case the API can be interpreted as the two methods pop() and push(), or, more generally, as the idea that one can use an item of type Stack that implements the behavior of a stack: a pile exposing its top to add/remove elements.

This concept can be carried to the point where a class interface in an API has no methods at all, but only behaviors associated with it. For instance, the Java language and Lisp API include the interface Serializable, which requires that each class that implements it should behave in a serialized fashion. This does not require to have any public method, but rather requires that any class that implements it to have a representation that can be saved (serialized) at any time (this is typically true for any class containing simple data and no link to external resources, like an open connection to a file, a remote system, or an external device).

In this sense, in object oriented languages, the API defines a set of object behaviors, possibly mediated by a set of class methods.

In such languages, the API is still distributed as a library. For example, the Java language libraries include a set of APIs that are provided in the form of the JDK used by the developers to build new Java programs. The JDK includes the documentation of the API in JavaDoc notation.

The quality of the documentation associated with an API is often a factor determining its success in terms of ease of use.

An API can also be an implementation of a protocol.

In general the difference between an API and a protocol is that the protocol defines a standard way to exchange requests and responses based on a common transport, while an API provides a library to be used directly: hence there can be no transport (no information physically transferred from some remote machine), but rather only simple information exchange via function calls (local to the machine where the elaboration takes place).

When an API implements a protocol it can be based on proxy methods for remote invocations that underneath rely on the communication protocol. The role of the API can be exactly to hide the detail of the transport protocol.

Protocols are usually shared between different technologies (system based on given computer programming languages in a given operating system) and usually allow the different technologies to exchange information, acting as an abstraction/mediation level between the two worlds. While APIs are specific to a given technology: hence the APIs of a given language cannot be used in other languages, unless the function calls are wrapped with specific adaptation libraries.

When used in the context of web development, an API is typically a defined set of Hypertext Transfer Protocol (HTTP) request messages, along with a definition of the structure of response messages, which is usually in an Extensible Markup Language (XML) or JavaScript Object Notation (JSON) format. While "Web API" is virtually a synonym for web service, the recent trend (so-called Web 2.0) has been moving away from Simple Object Access Protocol (SOAP) based services towards more direct Representational State Transfer (REST) style communications.[3] Web APIs allow the combination of multiple services into new applications known as Mashup_(web_application_hybrid)|mashups.[4]

The practice of publishing APIs has allowed web communities to create an open architecture for sharing content and data between communities and applications. In this way, content that is created in one place can be dynamically posted and updated in multiple locations on the web.

The POSIX standard defines an API that allows a wide range of common computing functions to be written in a way such that they may operate on many different systems (Mac OS X, and various Berkeley Software Distributions (BSDs) implement this interface); however, making use of this requires re-compiling for each platform. A compatible API, on the other hand, allows compiled object code to function without any changes to the system implementing that API. This is beneficial to both software providers (where they may distribute existing software on new systems without producing and distributing upgrades) and users (where they may install older software on their new systems without purchasing upgrades), although this generally requires that various software libraries implement the necessary APIs as well.

Microsoft has shown a strong commitment to a backward compatible API, particularly within their Windows API (Win32) library, such that older applications may run on newer versions of Windows using an executable-specific setting called "Compatibility Mode".[6]

Apple Inc. has shown less concern, breaking compatibility or implementing an API in a slower "emulation mode"; this allows greater freedom in development, at the cost of making older software obsolete.[citation needed]

Among Unix-like operating systems, there are many related but incompatible operating systems running on a common hardware platform (particularly Intel 80386-compatible systems). There have been several attempts to standardize the API such that software vendors may distribute one binary application for all these systems; however, to date, none of these have met with much success. The Linux Standard Base is attempting to do this for the Linux platform, while many of the BSD Unixes, such as FreeBSD, NetBSD, and OpenBSD, implement various levels of API compatibility for both backward compatibility (allowing programs written for older versions to run on newer distributions of the system) and cross-platform compatibility (allowing execution of foreign code without recompiling).

The two options for releasing API are:

A mix of the two behaviors can be used as well.

The related term Application Binary Interface (ABI) is a lower level definition concerning details at the assembly language level. For example, the Linux Standard Base is an ABI, while POSIX is an API.[7]

APIs that are intended to be used by more than one high-level programming language often provide, or are augmented with, facilities to automatically map the API to features (syntactic or semantic) that are more natural in those languages. This is known as language binding, and is itself an API. The aim is to encapsulate most of the required functionality of the API, leaving a "thin" layer appropriate to each language.

Below are listed some interface generator tools which bind languages to APIs at compile time.

The bulk of this article is reused from the Wikipedia article.