A standard hospital room in Denmark

A hospital is a health care institution providing patient care and treatment, study of diseases, and training for doctors and nurses.[1] Hospitals are usually funded by the public sector, by for-profit and non-profit health organizations, health insurance companies, or charitable organizations. Historically, hospitals were often founded and funded by religious orders or charitable individuals and leaders.[2] Today, hospitals are largely staffed by professional physicians, surgeons, and nurses. However, various Catholic religious orders such as the Alexians and the Bon Secours Sisters still focus on hospital ministry today, as well as several Christian denominations, including the Methodists and Lutherans, which run hospitals.[3]

In accord with the original meaning of the word, hospitals were originally "places of hospitality" for the needy[4], and this meaning is still preserved in the names of some institutions such as the Royal Hospital Chelsea, established in 1681 as a retirement and nursing home for veteran soldiers.[5]

A hospital may be a single building or a number of buildings on a campus. Many hospitals with pre-twentieth-century origins began as one building and evolved into campuses. Worldwide, most hospitals are run on a nonprofit basis by governments or charities. Some hospitals may be affiliated with universities. Hospital services are typically utilized in one of two ways. Some patients use the hospital for outpatient care, primarily for diagnosis, treatment, or therapy without staying overnight. Others must opt for inpatient care, admitted for overnight care over a period of two or more days for complicated illnesses and procedures.

Hospitals should not be confused with clinics, a smaller outpatient-only facility that is often run by a government agency for health services or a private partnership of physicians (in nations where private practice is allowed).

The most common hospital type is the general hospital, which is organized to treat many kinds of disease and injury. A general hospital typically has an emergency department to deal with immediate and urgent threats to health. Larger cities may have several hospitals of varying sizes and facilities. Some hospitals, especially in the United States, have their own ambulance service.

A district hospital typically is the major health care facility in its region, with large numbers of beds for intensive care and long-term care.

Types of specialized hospitals include trauma centers, rehabilitation hospitals, children's hospitals, geriatric hospitals, and hospitals for dealing with specific medical needs such as psychiatric problems or certain disease categories such as cardiac, oncology, or orthopedic.

Specialized hospitals can help reduce health care costs compared to general hospitals. For example, Narayana Hrudayalaya's Bangalore cardiac unit, which specializes in cardiac surgery, allows for a significantly greater number of patients. It has 3000 beds (more than 20 times the average American hospital), and in pediatric heart surgery alone, it performs 3000 heart operations annually, making it by far the largest such facility in the world.[6][7] Surgeons are paid on a fixed salary instead of per operation, thus the costs to the hospital drops when the number of procedures increases, taking advantage of economies of scale.[6] Additionally, it is argued that costs go down as all its specialists become efficient by working on one "production line" procedure.[7]

A teaching hospital combines assistance to patients with teaching to medical students and nurses and often is linked to a medical school, nursing school, or university. These hospitals may also conduct medical research in affiliation with the university. 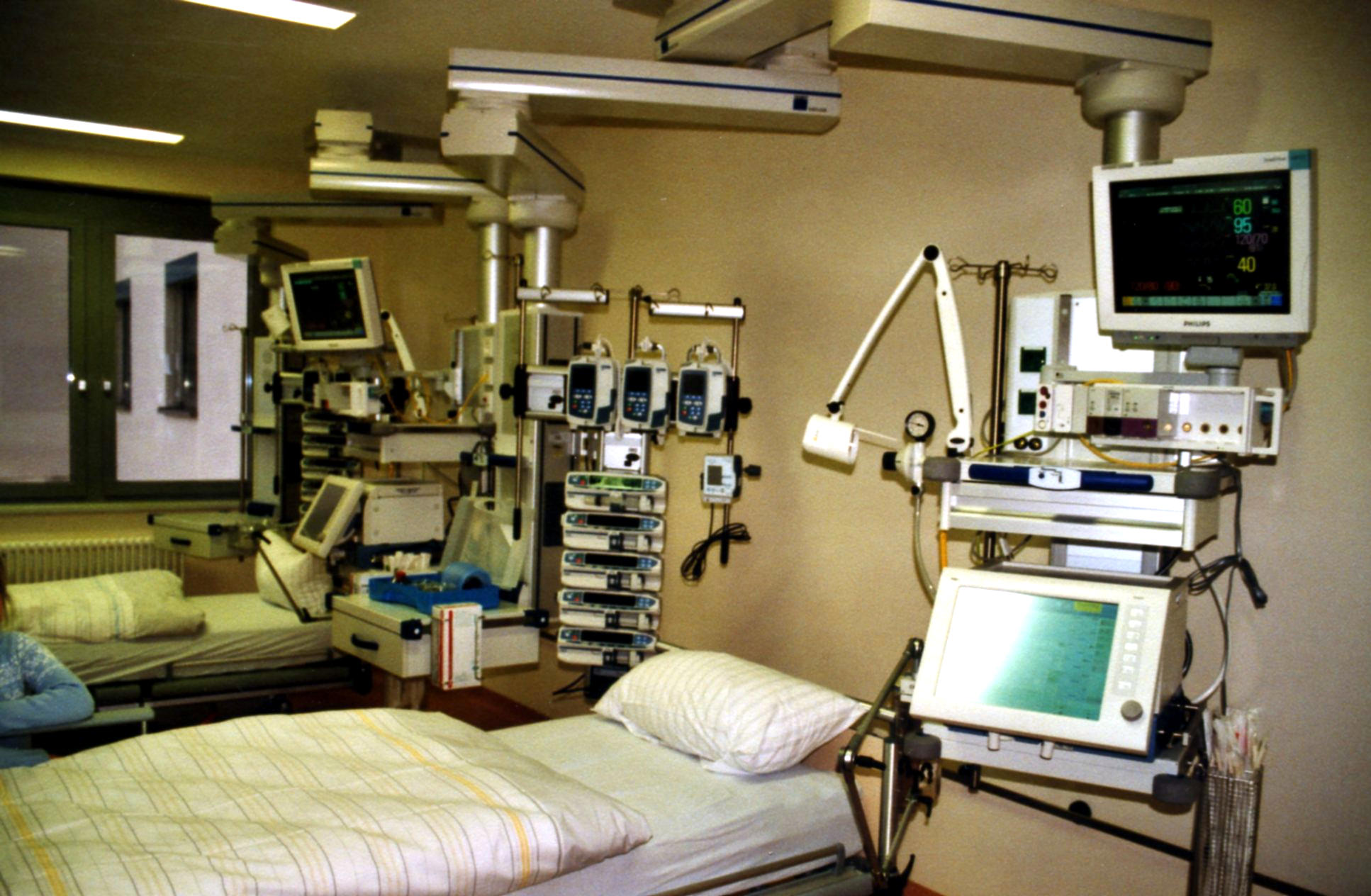 An intensive care unit at a German hospital

Hospitals vary widely in the services they offer and therefore, in the departments (or "wards") they have. Each is usually headed by a chief physician. Hospitals often contain acute services such as an emergency department or specialist trauma center, burn unit, surgical center, or urgent care unit. These may then be backed up by more specialist units such as[8]:

Common support units include a dispensary or pharmacy, pathology, and radiology. On the non-medical side, medical records, information management (IM, IT, or IS), clinical engineering (aka biomed), facilities management, plant ops (aka maintenance), dining services, and security departments provide important support to patients and staff alike.[8]

In the modern era, hospitals are typically funded by the government of the country in which they are situated, supported by charitable or religious associations, or operated and funded in the private sector.

In the United Kingdom for example, a relatively comprehensive, "free at the point of delivery" health care system exists, funded by the state. Hospital care is available to all legal residents, although free emergency care is available to anyone, regardless of nationality or status. As hospitals prioritize their limited resources, waiting lists for non-crucial treatment are beginning to appear in some countries, as opposed to letting higher-payers get treated first. Instead those who can afford it may take out private health care to get treatment more quickly.[9] On the other hand, some countries, including the United States, have in the twentieth century introduced a private, for-profit approach to providing hospital care, with few state-supported charity hospitals remaining today.[10] For-profit hospitals in such countries that tend to admit uninsured patients in emergency situations (such as during and after Hurricane Katrina in the USA) incur direct financial losses[10], ensuring a clear disincentive to admit such patients. In the United States, however, laws exist to ensure patients receive care in life threatening emergency situations regardless of the patient's ability to pay.[11]

Independent external assessment of quality is one of the most powerful ways to assess the health care delivered by a hospital. Hospital accreditation is one means by which this is achieved.[12] In many parts of the world such accreditation is sourced from other countries, a phenomenon known as international healthcare accreditation, by groups such as Accreditation Canada (Canada), The Joint Commission (U.S.), the Trent Accreditation Scheme (U.K.), and Haute Authorité de santé (HAS; France).