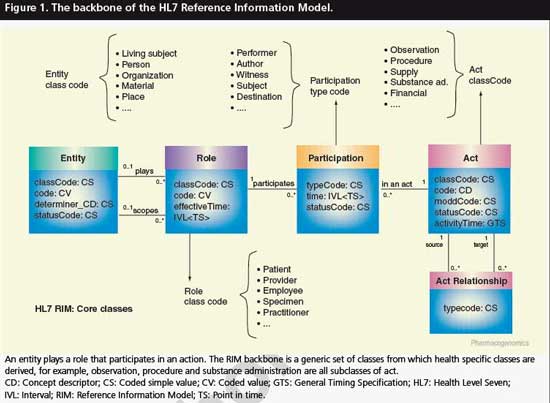 The Reference Information Model (RIM) is an important component of the HL7 v3.0 standard and is based on XML.

The term "HL7" is also used to refer to some of the specific standards created by the organization (e.g., HL7 v2.x, v3.0, HL7 RIM).[2] HL7 and its members provide a framework (and related standards) for the exchange, integration, sharing, and retrieval of electronic health information. v2.x of the standards, which support clinical practice and the management, delivery, and evaluation of health services, are the most commonly used in the world.[3]

The International Organization for Standardization (ISO) got involved with standardizing network exchanges of data between computers around 1979, creating the Open Systems Interconnect (OSI) standards model. These formal OSI standards ranged across seven levels, from OSI Level 1 (physical layer, e.g. communication over coaxial cable) to OSI Level 7 (application layer, e.g. communication between clinical software). By 1981, researchers at University of California - San Francisco had created a proprietary protocol that unbeknownst to them at the time fit under the OSI Level 7 model. The protocol was developed for clinical purposes such that "computers exchanged several core messages, including the synchronization of patient admission-discharge-transfer information, orders from clinical areas, and the display of textual results to the clinical areas."[4]

By 1985, Simborg Systems (which developed hospital information systems) sought to have a non-proprietary protocol created because "standardization efforts at the time was either fragmented, in a different direction or with a different scope."[4] This led to a push to create a new standards organization, with initial meetings occurring at the end of March 1987. The meetings produced the term "HL7" and prompted a non-profit organization to be created, eventually known as Health Level Seven International. Version 1.0 of the HL7 specification was released in October 1987. The direction of HL7 was largely led by Simborg Systems; however, with greater practical use seen in furthering the protocol and non-profit, the first non-Simborg Systems chairperson, Ed Hammond, took the reigns in 1989.[4] By June 1990, Version 2.1 was published and included mechanisms for results reporting and billing. By the early- to mid-1990s news of HL7 was beginning to spread to international clinical sectors, particularly parts of Europe, including Netherlands, Germany, Canada, Japan, Australia, and the United Kingdom.[4][5]

Version 3.0 of the HL7 standard was released in late 2005, which internationalized it and made it more consistent and precise.[6] Where the 2.x standards eventually received wide adoption for their flexibility and available implementation options, the 3.0 standards, in contrast, departed from that flexibility in order to be more "definite and testable, and provide the ability to certify vendors' conformance."[7] In 2009, Corepoint Health reported that most HL7 messaging was occurring using 2.3 and 2.3.1 models, with 3.0-based messages representing only a tiny fraction of all interfaces[8]; in 2012 Corepoint Health's Rob Brull estimated that more than 90 percent of all healthcare systems were still utilizing 2.x models.[9] That trend continued, with several experts proclaiming the standard to be more or less a failure.[10][11]

In early 2012, HL7 announced the HL7 FHIR (Fast Healthcare Interoperability Resources) initiative, which would utilize the best aspects of both 2.x and 3.0 standards, optimally resulting in a standard that is 20 percent the size of 3.0 but still meet the operation requirements of 80 percent of systems using the standard.[12] FHIR is being built on RESTful web services and provides modular, extensible "resources" to provide some flexibility but within a more fixed framework.[13] In December 2014, HL7 announced the Argonaut Project, meant "to hasten current FHIR development efforts in order to create practical and focused guidelines and profiles for FHIR by the spring of 2015."[14]

HL7 v2.x and 3.0 are the primary standards from the organization. They provide a framework for data exchange among clinical and healthcare systems in an ideal format. The 2.x standards are flexible, with several implementation options, loosely geared towards "clinical interface specialists" working to move clinical data in the application space. The 3.0 standards are designed to be more fixed, precise, and international, geared towards governments and end users of clinical applications.[8]

While HL7 v2.x and 3.0 are the primary standards, a few other important standards and components are associated with HL7, as detailed below.

The Reference Information Model (RIM) is an important component of the HL7 Version 3 standard. RIM expresses the data content needed in a specific clinical or administrative context and provides an explicit representation of the semantic and lexical connections that exist between the information carried in the fields of HL7 messages.[16] The standard is accepted as official by the ISO as ISO/HL7 21731; the original was approved in 2006, with a revised version appearing in 2014.[17]

The Clinical Document Architecture (CDA) is an XML-based markup standard intended to specify the encoding, structure, and semantics of clinical documents for exchange.[18] The standard is accepted as official by the ISO as ISO/HL7 27932; the most current version comes from 2009.[19]

The Clinical Context Object Workgroup (CCOW) family of standards are designed to enable disparate applications to share user context and patient context in real-time, particularly at the user-interface level. CCOW implementations typically require a CCOW vault system to manage user security between applications. The primary standard under CCOW is the Context Management Specifications (CCOW), which "serves as the basis for ensuring secure and consistent access to patient information from heterogeneous sources."[20] This standard is accepted as official by ANSI as ANSI/HL7 CMS V1.6.

The Fast Healthcare Interoperability Resources (FHIR) standard was announced in 2012. FHIR was originally built on RESTful web services and provides modular, extensible "resources" to provide some flexibility but within a more fixed framework. During the development phase of FHIR, the driving fundamental principles were[21]:

In February 2014, Health Level Seven International published FHIR as a "Draft Standard for Trial Use" (DSTU), Release 1, version DSTU 1 (v0.0.82).[22] By December 2014, a broad cross-section of stakeholders committed to the Argonaut Project[23], which was dedicated to providing accelerated funding and political will to publish FHIR implementation guides and profiles for query/response interoperability and document retrieval by the spring of 2015. It would then be possible for medical records systems to migrate from the current practice of exchanging complex clinical document architecture (CDA) documents and instead exchange sets of simpler, more modular and interoperable FHIR JSON objects.[24] By August 2016, the CEO of HL7 was suggesting that although still a draft standard, FHIR was already capable of providing valuable features to early adopters.[25] In March 2017, the first standards for trial use or STU version of FHIR was released as Release 3. It included coverage of a variety of clinical workflows, a resource description framework format, and a variety of other updates.[26] Revision 4 was released in January 2019, with the key takeaway that "applications that implement the normative parts of R4 no longer risk being non-conformant to the standard," with those normative parts largely being "the RESTful API, the XML and JSON formats, the terminology layer, the conformance framework as well as Patient and Observation resources."[27]