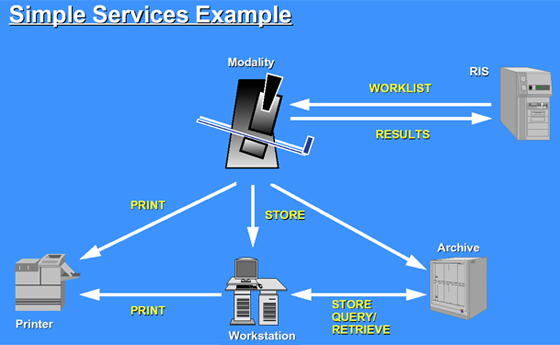 This image demonstrates a basic set of interconnections among a PACS, a radiology information system (RIS), the imaging modalities, and other components of the PACS, standardized by DICOM.

A picture archiving and communication system (PACS) is a digital imaging system composed of a set of components that allow for the digital acquisition, archiving, communication, retrieval, processing, distribution, and display of medical images.[1] The PACS may consist of only a few components or be sufficiently complex to handle a hospital or healthcare enterprise environment. Regardless, it must be durable enough for daily use in a clinical environment, integrate to and from several medical imaging modalities, and have sufficient workstations for technicians utilizing those modalities to perform their work inside and outside the radiology department.[1] PACS benefit healthcare providers by digitally managing medical images, eliminating the need to manually file, retrieve, or transport film jackets. This often saves processing time in both the diagnostics and reporting related to the imagery, especially when integrated with speech recognition technology.[2]

While the theoretical concepts surrounding a digital image management system were around as early as the late 1970s, the idea didn't solidify until the January 1982 First International Conference and Workshop on Picture Archiving and Communications Systems in Newport Beach, California.[1] There researcher Carla Marceau defined the PACS as "a digital system for acquiring, storing, moving and displaying picture or image information."[3] This was followed soon after (July 1982) by the The First International Symposium on PACS and PHD (Personal Health Data) in Japan and the EuroPACS annual conference in 1983. Another meeting dedicated to PACS occurred in Evian, France in October 1990, dubbed "central to the formation of a critical PACS project: the Medical Diagnostic Imaging Support System."[1] By late 1997, the disparate PACS groups spread across the United States, Japan, and Europe began working together to form some truly international PACS implementations. This international effort was buoyed by the internationalization of the DICOM standard in 1993, globalization of imaging manufacturers, and sharing of PACS information and experiences among the groups.

A quality PACS design depends on system connectivity and workflow efficiency. It features a standardized, open architecture and is expandable for future growth. Hardware includes imaging device interfaces, storage devices, communication networks, patient data servers, display tools, and imaging modalities "integrated by a standardized, flexible software system for communication, database management, storage management, job scheduling, interprocessor communication, error handling, and network monitoring."[1] Other components that necessarily integrate to the PACS include a radiology information system (RIS) and a hospital information system (HIS), extending its effectiveness even further. All of these components "talk" to each other in no small part because of the DICOM (Digital Imaging and Communications in Medicine) standard which ensures a uniform handling, storing, printing, and transmitting of medical imaging data.[1][4]

This interfacing between multiple systems provides more consistent and reliable data by reducing the risk of entering incorrect patient information (through QA and error checking) and by strengthening merged datasets across multiple systems by using a unique, transferable ID like an NHS or Social Security number. Analysis and reporting also becomes more integrated and rapid across the entire provider-patient pipeline.[4]