Difference between revisions of "Journal:Fast detection of 10 cannabinoids by RP-HPLC-UV method in Cannabis sativa L."

Cannabis has regained much attention as a result of updated legislation authorizing many different uses, and it can be classified on the basis of the content of Δ9-tetrahydrocannabinol (Δ9-THC), a psychotropic substance for which there are legal limitations in many countries. For this purpose, accurate qualitative and quantitative determination is essential. The relationship between THC and cannabidiol (CBD) is also significant, as the latter substance is endowed with many specific and non-psychoactive proprieties. For these reasons, it becomes increasingly important and urgent to utilize fast, easy, validated, and harmonized procedures for determination of cannabinoids. The procedure described herein allows rapid determination of 10 cannabinoids from the inflorescences of Cannabis sativa L. by extraction with organic solvents. Separation and subsequent detection are by reversed-phase high-performance liquid chromatography with ultraviolet detector (RP-HPLC-UV). Quantification is performed by an external standard method through the construction of calibration curves using pure standard chromatographic reference compounds. The main cannabinoids dosed (g/100 g) in actual samples were cannabidiolic acid (CBDA), CBD, and Δ9-THC (Sample L11 CBDA 0.88 ± 0.04, CBD 0.48 ± 0.02, Δ9-THC 0.06 ± 0.00; Sample L5 CBDA 0.93 ± 0.06, CBD 0.45 ± 0.03, Δ9-THC 0.06 ± 0.00). The present validated RP-HPLC-UV method allows determination of the main cannabinoids in Cannabis sativa L. inflorescences and appropriate legal classification of it as either hemp or a drug-type.

Cannabis is classified into the family of Cannabaceae and initially encompassed three main species: Cannabis sativa, Cannabis indica, and Cannabis ruderalis.[1] Nowadays, Cannabis has only one species due to continuous crossbreeding of the three species to generate hybrids. In fact, all plants are categorized as belonging to Cannabis sativa and classified into chemotypes based on the concentration of the main cannabinoids. Depending on the ratio of |tetrahydrocannabinolic acid (THCA) to cannabidiolic acid (CBDA) (the THCA/CBDA ratio), some chemotypes have been distinguished. In particular, chemotype I or “drug plants” have a TCHA/CBDA ratio >1.0, chemotype II plants exhibit an intermediate ratio, chemotype III or “fiber plants” have a THCA/CBDA ratio <1.0, chemotype IV plants contain cannabigerolic acid (CBGA) as the main cannabinoid, and chemotype V plants contain almost no cannabinoids.[2][3][4][5]

In Italy, the interest in Cannabis sativa L. has increased recently, mainly due to December 2016 legislation (Legge 2 Dicembre 2016, n. 242).[6] As a result, requests have been made to develop cost-effective and easy-to-use quantitative and qualitative methods for analysis of cannabinoids.

Industrial hemp is used in several sectors, such as in the pharmaceutical, cosmetic, food, and textile industries, as well as in energy production and building. In general, fiber-type plants are less used in the pharmaceutical field, where drug-type plants are more often employed.[5] However, there is also an increased interest in hemp varieties containing non-psychoactive compounds. In fact, the European Union has approved 69 varieties of Cannabis sativa L. for commercial use.[7]

Hemp has a complex chemical composition that includes terpenoids, sugars, alkaloids, stilbenoids, quinones, and the characteristic compounds of this plant, namely cannabinoids. Cannabis sativa L. has several chemotypes, each of which is characterized by a different qualitative and quantitative chemical profile.[5] The cannabinoids, terpenes, and phenolic compounds in hemp are formed through secondary metabolism.[3][8] The term “cannabinoid” indicates terpenophenols derived from Cannabis. More than 90 cannabinoids are known, and some are derived from breakdown reactions.[8] Mechoulam and Gaoni[9] were the first to define cannabinoids “as a group of C21 compounds typical of and present in Cannabis sativa, their carboxylic acids, analogs, and transformation products.” Currently, cannabinoids have been classified according to their chemical structure, with the primary cannabinoids constituting seven types of cannabigerol (CBG); five types of cannabichromene (CBC); seven types of cannabidiol (CBD); the main psychoactive cannabinoid Δ9-tetrahydrocannabinol (Δ9-THC) in nine different forms, including its acid precursor (Δ9-tetrahydrocannabinolic acid, Δ9-THCA); Δ8-tetrahydrocannabinol (Δ8-THC), which is a more stable isomer of Δ9-THC but 20% less active; three types of cannabicyclol (CBL); five different forms of cannabielsoin (CBE); seven types of cannabinol (CBN), which is the oxidation artifact of Δ9-THC; cannabitriol (CBT); cannabivarin (CBDV); and tetrahydrocannabivarin (THCV).[10][11] THC, CBD, CBG, CBN, and CBC are not biosynthesized in Cannabis sativa, and the plant produces the carboxylic acid forms of these cannabinoids (THCA, CBDA, CBGA, CBNA, and CBCA). Cannabinoid acids undergo a chemical decarboxylation reaction triggered by different factors, mainly temperature. This decarboxylation reaction leads to the formation of the respective neutral cannabinoids (THC, CBD, CBG, CBN, and CBC).[12][13]

There are numerous methods to quantify cannabinoids[14][15][16][17][18][19][20][21], some of which require expensive mass spectrometry detectors.[22][23][24][25] Furthermore, there is a great deal of uncertainty around the use of gas chromatography (GC) for the titration of cannabinoids due to the high temperature of the injector and detector, which can lead to the decarboxylation of cannabinoid acids if not derivatized correctly.[26] Moreover, recent studies have reported that cannabinoid acid decarboxylation is only partial, and as a result the actual value is underestimated. A high-performance liquid chromatography (HPLC) system allows for determination of the actual cannabinoid composition of both neutral and acid forms without the necessity of the derivatization step.[13]

It is necessary, in addition to honed methods, to develop new procedures with a view to discriminate different Cannabis varieties in order to identify and titrate cannabinoids in a simple way. These methods should ideally be fast, easy, robust, and cost-efficient, as they can be used not only by research laboratories but also by small companies with a view on quality control.

This study focuses on the development, validation, and step-by-step explanation of a rapid, simple, and reproducible HPLC ultraviolet detector-based (HPLC-UV) method for identification and quantification of the main cannabinoids in hemp inflorescences. The method described is focused on the quantification of CBD but can also be applied to check the levels of THC.

The aim of this work was to develop a new analytical method for determination of the main cannabinoids in hemp samples. In fact, the method described below can be used as a routine quality control procedure and can be applied by the pharmaceutical industry, small laboratories, or even small pharmacies.

A crucial aspect for accurate identification and quantification of analytes is optimization of separation conditions, and therefore various preliminary tests were carried out (e.g., mobile phase, detection wavelength). Different mobile phases were tested, and trials were performed with different compositions and gradient elution to optimize the separation of all 10 target compounds considered (see supplementary material, File S2). The greatest difficulty was that of separating CBD and THCV, which in many cases co-eluted. It was also difficult to separate the isomers Δ9-THC and Δ8-THC. The best resolution of cannabinoids was obtained using a chromatographic column and, as an eluent mixture, water with 0.085% phosphoric acid and acetonitrile with 0.085% phosphoric acid.

The quantification of cannabinoids was made at 220 nm after testing different wavelengths (see supplementary material, File S2). This wavelength represents the best compromise for all the cannabinoids considered and was selected to detect and integrate all compounds of interest within the dedicated concentration range. As far as chromatographic analysis is concerned, before using the instrument, the system was conditioned for 20 minutes by fluxing the eluent mixture in the instrument under the same conditions as the method, and then a chromatographic run was performed by injecting 5 μL of acetonitrile to verify that the chromatographic system was adequately cleaned. Simultaneously with the analysis of the sample, standard solutions were injected at different concentrations for the construction of calibration curves and to evaluate the separation and identification of each compound. The identification of cannabinoids was performed by comparing their retention times with those obtained by the injection of pure standards and by an enhancing procedure. Figure 1 shows a chromatogram of a standard mixture of cannabinoids, and Figure 2 shows a chromatogram of a sample of hemp. 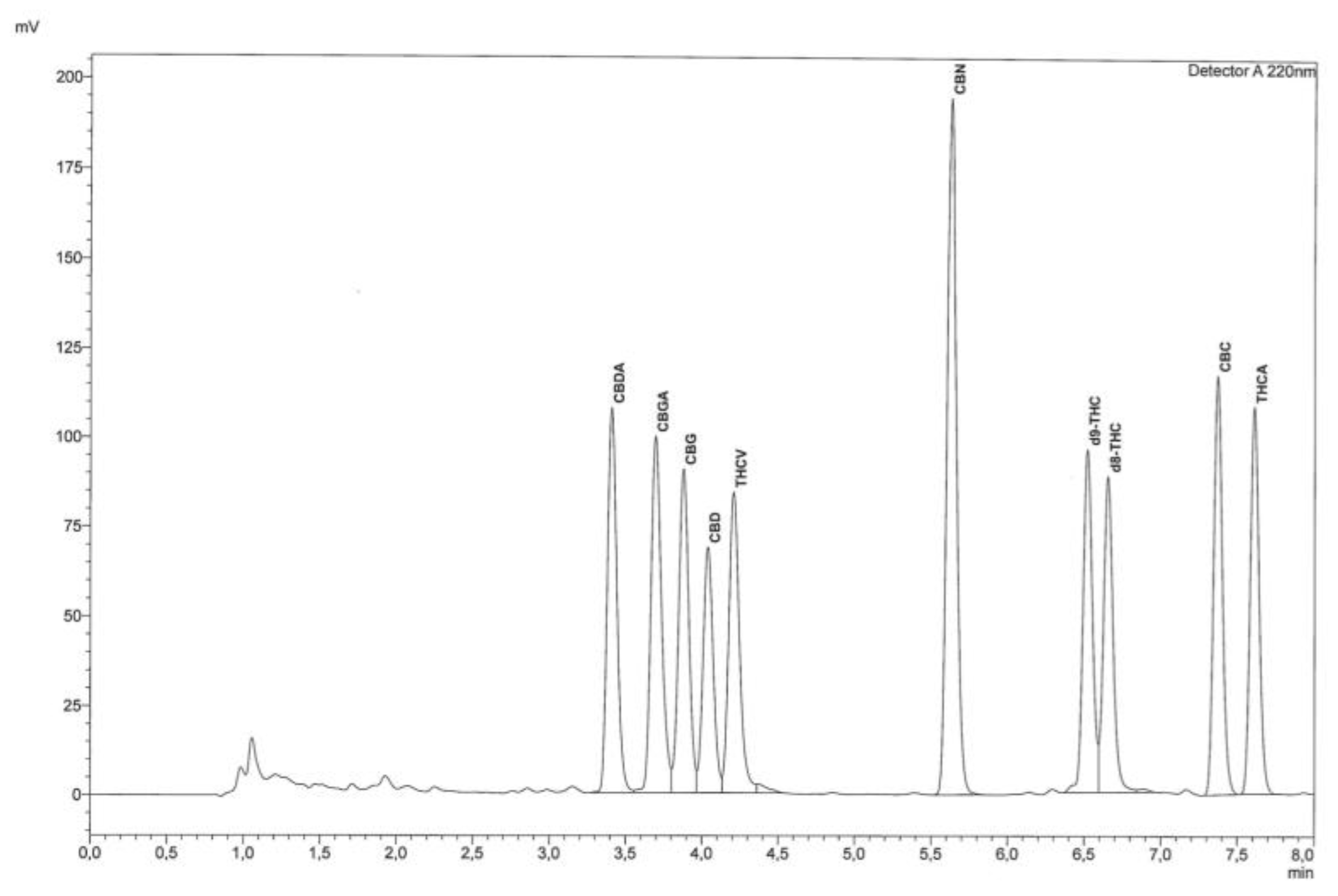 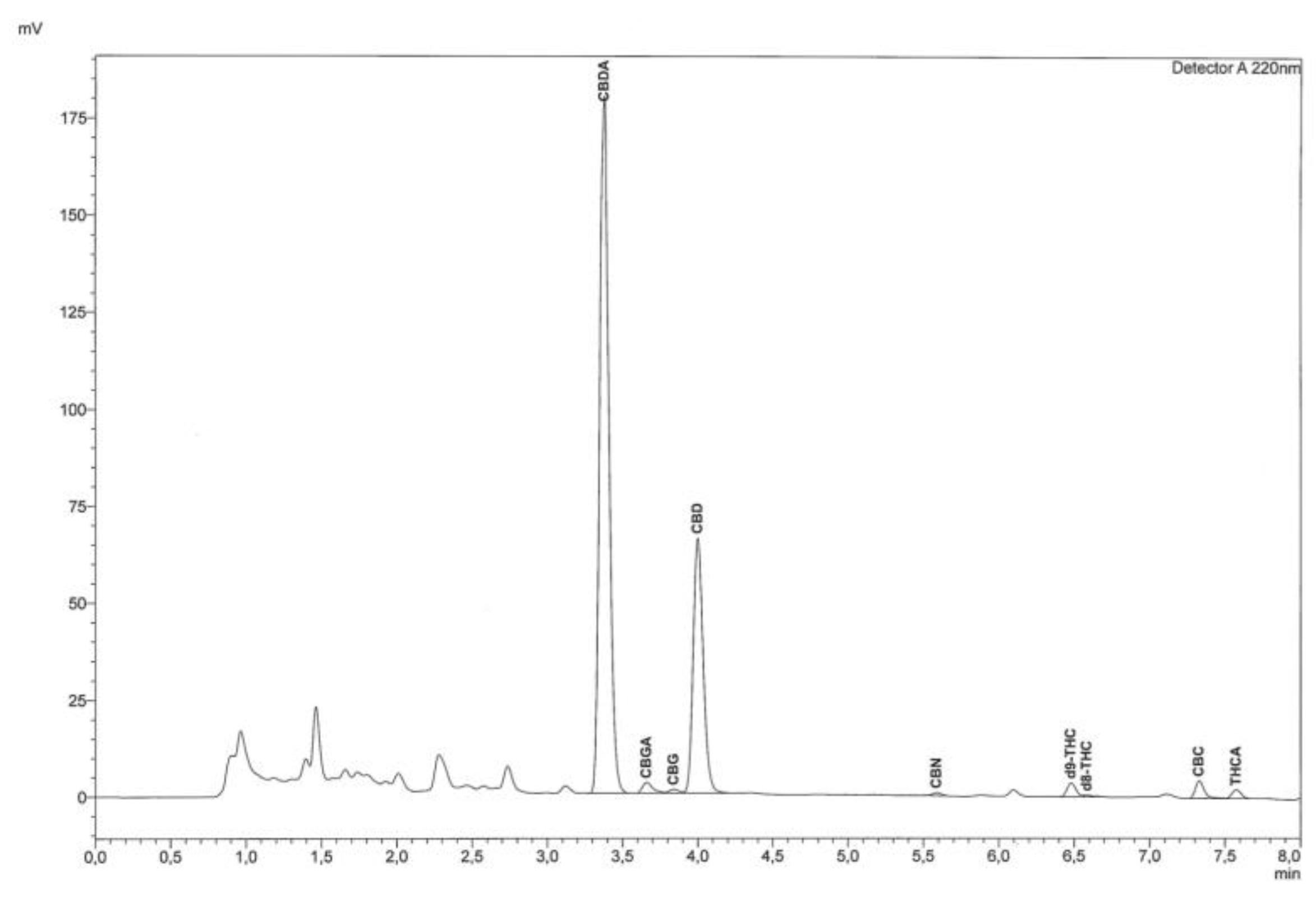 The precision of the method was measured by the expression of repeatability (r) and reproducibility (R). Precision was expressed through coefficient of variation (CV%).

The RSDs obtained in the reproducibility studies are also shown in Table 1, above. The maximum RSD value was 2.13 for CBGA. The other cannabinoids show RSD values lower than 1.91, and the lowest of the RSDs was 0.09 for CBDA, which is probably due to the higher concentration of this cannabinoid.

The tests were performed by using three different concentrations to test the recovery values in the linearity range of the method. Quantities of CBD (4, 8, and 24 μg/mL) were added, thus assessing concentrations similar to, higher, and lower than those found in samples. Recovery was determined according to this modality for CBD and was 84.92%.

An evaluation of recovery on all the compounds present in the sample was carried out by proceeding with a further extraction with 10 mL of methanol-chloroform on the sample residue after the usual extraction; in this extract, some cannabinoids were present, and, indirectly, the percentage of recovery was determined. The percentage of recovery values, as shown in Table 1, was higher than 84.92% and can be considered very satisfactory. In fact, considering CBD, the percentages are higher than those previously reported in the literature.[5]

The instrumental limit of detection was determined by the calibration curve, according to the formulas expressed later in the "Validation parameters" section. The instrumental limit of detection (LOD) values obtained for CBDA and CBGA (Table 1) were lower, while those of CBG and CBD were comparable with similar methods described in literature.[5][27] Low LOD values were found also for the other cannabinoids (THCV, CBN, Δ-9 THC, Δ-8 THC, CBC, THCA), indicating that the method is sensitive.

The instrumental limit of quantification was determined by a calibration curve (according to the formulas expressed later in the "Validation parameters" section), with consideration that the signal-to-noise method is particularly useful to quantify the cannabinoids present at lower concentrations, such as THC. As reported for the LODs, the instrumental limit of quantification (LOQ) values obtained for CBDA and CBGA (Table 1) were also lower than those reported in the literature, while those for CBG and CBD were comparable with those of other methods described for similar procedures.[5][27] In addition, the other cannabinoids (THCV, CBN, Δ-9 THC, Δ-8 THC, CBC, THCA) showed low LOQs. The instrumental noise was registered in µV, by performing three blank injections with the ASTM method[28] given by the instrument, and a maximum CV% of 3.49% was calculated for all individual compounds to determine the single LOD and LOQ, which was considered acceptable.

In order to evaluate the linearity of the method, eight different points of standard mixture solutions were analyzed in triplicate by HPLC-UV.

The following equations are related to the calibration curves in a concentration range between 0.01–100 μg/mL (Table 1):

With the aid of the equation obtained from the calibration curve, the quantity of each cannabinoid was calculated.

To express the data relative to the content of the individual cannabinoid as a percentage (%, p/p) referred to the dried material, it is necessary to refer to the weight of the sample while considering the dilution factor. The linearity in the concentration range analyzed was good for cannabinoid standards, being r2 > 0.998, as reported before.

The authors gratefully acknowledge Enecta Srl for providing samples. The experimentation was conducted in the context of a PhD project entitled Harmonized procedures of analysis of medical, herbal, food and industrial cannabis: Development and validation of cannabinoids’ quality control methods, of extraction and preparation of derivatives from the plant raw material, according to the product destination and funded by Enecta Srl.

The authors declare no conflict of interest.