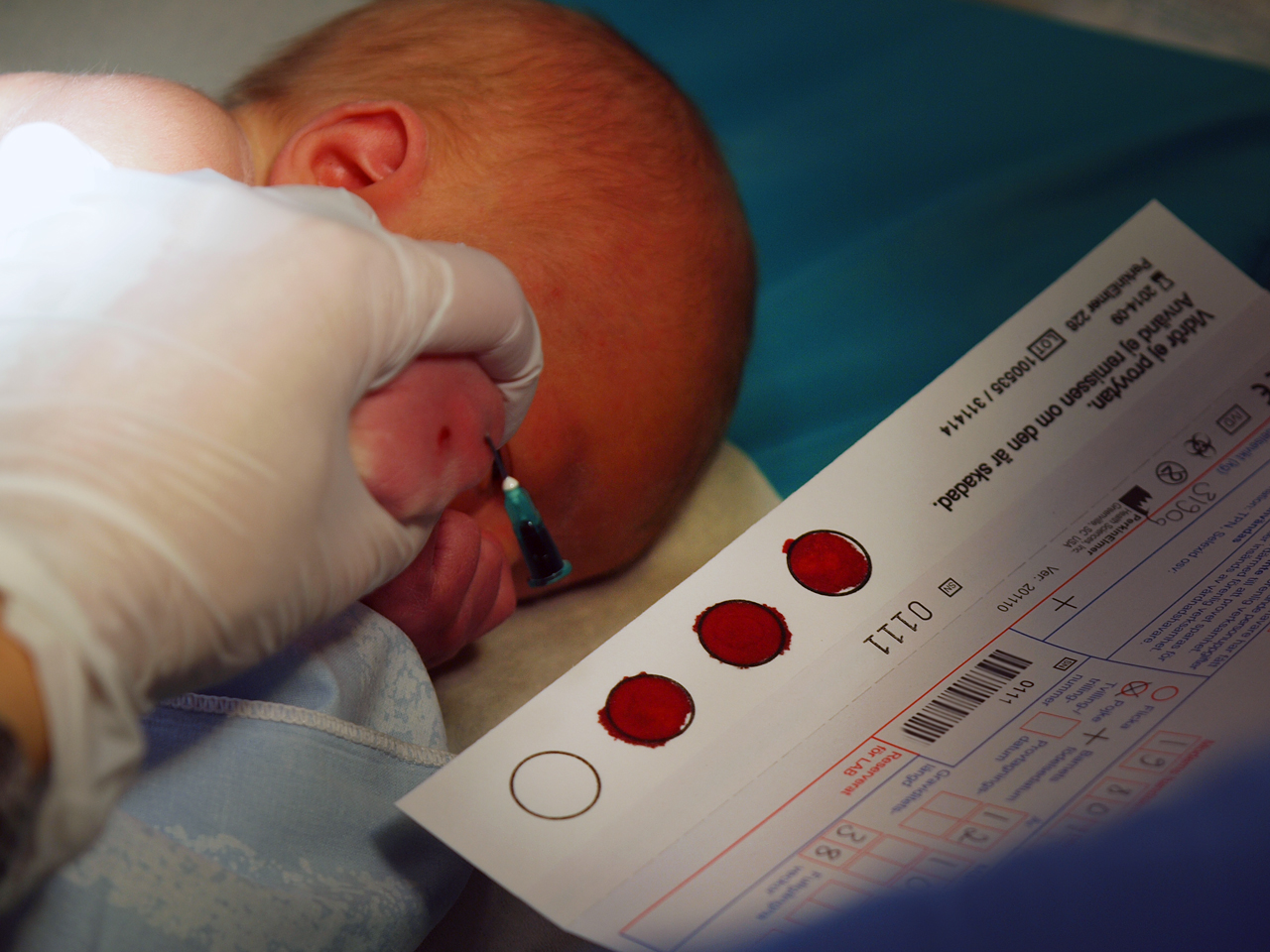 Blood samples are collected from a newborn baby in Sweden for the national PKU registry biobank.

A biobank is a collection of biological samples (usually human) for use in research. The samples may also include personal medical and genealogical data. Sites for these collections come in different forms, typically based on the types of samples being stored and the scientific domain associated with them. These sites can be loosely categorized into two types: those based on biological specimens from patients and donors, and those specifically designed to aid in population-based research.[1][2][3]

Biobanks give researchers access to data representing larger numbers of people than could be analyzed in previously used systems. Furthermore, samples in biobanks and the data derived from those samples can often be used by multiple researchers for multiple purposes. Large collections of samples representing tens or hundreds of thousands of individuals are necessary to conduct certain studies. However, these activities come with their share of questions regarding research and medical ethics, and they have provoked discussions in some community circles. While viewpoints on what constitutes appropriate biobank ethics diverge, consensus has been reached that relying on biobanks without carefully considered governing principles and policies could negatively impact communities participating in biobank programs.[1][4]

Many researchers have identified biobanking as a key area for infrastructure development in order to promote drug discovery and drug development.[2]

Prior to the late 1990s, scientists collected the biological specimens desired for their experiments themselves and did not have a particular goal of routinely sharing their specimens with other laboratories. When researching genetic disorders, scientists would only consider genes they already expected to be associated with that disorder—only looking for mutations in BRCA 1 or BRCA 2 for breast cancer, for example.[5]

By the late 1990s scientists realized that although many diseases are caused at least in part by a genetic component, few diseases originate from a single defective gene; most genetic diseases are caused by multiple genetic factors on multiple genes. Because the strategy of looking only at single genes was ineffective for finding the genetic components of many diseases, and because new technology made the cost of examining a single gene versus doing a genome-wide scan about the same, scientists began collecting much larger amounts of genetic information when any was to be collected at all. At the same time technological advances also made it possible for wide sharing of information, so when data was collected, many scientists doing genetics work found access to data from genome-wide scans collected for any one reason would actually be useful in many other types of genetic research. Whereas before data usually stayed in one laboratory, now scientists began to store large amounts of genetic data in single places for community use and sharing.[5][6]

The discovery of many single-nucleotide polymorphisms provided an immediate result of doing genome-wide scans and sharing data, with an early success being an improvement from the identification of about 10,000 of these with single-gene scanning and before biobanks, versus 500,000 by 2007 after the genome-wide scanning practice had been in place for some years.[5] A problem remained: this changing practice allowed the collection of genotype data, but it did not simultaneously come with a system to gather the related phenotype data. Whereas genotype data comes from a biological specimen like a blood sample, phenotype data has to come from examining a specimen donor with an interview, physical assessment, review of medical history, or some other process which could be difficult to arrange. Even when this data was available, there were ethical uncertainties about the extent to which and the ways in which patient rights could be preserved by connecting it to genotypic data. The institution of the biobank began to be developed to store genotypic data, associate it with phenotypic data, and make it more widely available to researchers who needed it.[5][6]

In 2008, United States researchers stored 270 million specimens in biobanks, and the rate of new sample collection was 20 million per year.[7] These numbers are arguably representative of a fundamental worldwide change in the nature of research between the time when such numbers of samples could not be used and the time when researchers began demanding them.[7] Collectively, researchers began to progress beyond single-center research centers to a next-generation qualitatively different research infrastructure.[8] Biobanks raise ethical, legal, and social challenges pertaining to their existence, including the fairness of collecting donations from vulnerable populations, providing informed consent to donors, managing the logistics of data disclosure to participants, confirming the right to ownership of intellectual property, and managing the privacy and security of donors who participate.[7][9] Because of these new problems, researchers and policymakers began to require new systems of research governance.[8]

Biobanks usually incorporate cryogenic storage facilities for the samples. They may range in size from individual refrigerators to warehouses, and they are typically maintained by institutions such as hospitals, universities, nonprofit organizations, and pharmaceutical companies.[10]

Biobanks can be loosely categorized into two types: those based on biological specimens from patients and donors, and those specifically designed to aid in population-based research.[1] Additionally, biobanks may be classified by purpose or design. Disease-oriented biobanks usually have a hospital affiliation through which they collect samples representing a variety of diseases, perhaps to look for biomarkers affiliated with disease.[11] Population-based biobanks need no particular hospital affiliation because they collect samples from large numbers of all kinds of people, perhaps to look for biomarkers for disease susceptibility in the general population.[12]

Examples of biobanks include:

Biobanks, like other DNA databases, must carefully store and document access to samples and donor information. The samples must be maintained reliably with minimal deterioration over time, and they must be protected from physical damage, both accidental and intentional. The registration of each sample entering and exiting the system is centrally stored, usually on a computer-based laboratory informatics system that can be backed up frequently. The physical location of each sample is noted to allow the rapid location of specimens. Archival systems de-identify samples to respect the privacy of donors and allow blinding of researchers to analysis. The database, including clinical data, is kept separately with a secure method to link clinical information to tissue samples. Room temperature storage of samples is sometimes used, developed in response to perceived disadvantages of low-temperature storage, such as costs and potential for freezer failure. Current systems are small and are capable of storing nearly 40,000 samples in about one-tenth of the space required by a -80 °C (-112 °F) freezer. Replicates or split samples are often stored in separate locations for security.[14]

One controversy of large databases of genetic material is the question of ownership of samples. As of 2007[update], Iceland had three different laws on ownership of the physical samples and the information they contain. Icelandic law holds that the Icelandic government has custodial rights of the physical samples themselves while the donors retain ownership rights.[1][15] In contrast, Tonga and Estonia give ownership of biobank samples to the government, but their laws include strong protections of donor rights.[15]

The Geographic Project was an international, decentralized effort to explore and understand humanity's common past through a massive collection of DNA. Like other biobanking efforts, the initiative was subjected to ethical committee oversight.

When a researcher wants to collect a human specimen for research, issues that arise include the right to privacy for research participants, ownership of the specimen and its derived data, the extent to which the donor can share in the return of the research results, and the extent to which a donor is able to consent to be in a research study.[16] With respect to consent, biobanks usually collect samples and data for multiple future research, making it difficult to obtain specific consent for any single research. Discussions have led to the belief that one-off consent or a broad consent for various research purposes may not meet ethical and legal requirements.[17]

Biobanks require a public governance process involving ethical oversight from an independent reviewer. For many types of research, and particularly medical research, oversight comes at the local level from an institutional review board. Institutional review boards typically enforce standards set by their country's government. To different extents, the law used by different countries is often modeled on biobank governance recommendations which have been internationally proposed.[1]

In 1998, the Icelandic Parliament passed the Act on Health Sector Database which allowed for the creation of a national biobank in that country.[1]

In 2005, the United States' National Cancer Institute founded the Office of Biorepositories and Biospecimen Research so that it could have a division to establish a common database and standard operating procedures for its partner organizations with biospecimen collections.[7]

In 2006, the Council of the European Union adopted a policy on human biological specimens which was novel for discussing issues unique to biobanks.[7]

Researchers have called for a greater critical examination of the economic aspects of biobanks, particularly those facilitated by the state.[18] Some note national biobanks are often funded by public or private partnerships, with finance provided by any combination of national research councils, medical charities, pharmaceutical company investment, and biotech venture capital.[19] In this way national biobanks enable an economic relationship mediated between states, national populations, and commercial entities. A strong commercial incentive underlies the systematic collection of tissue material. This can be seen particularly in the field of genomic research, where population sized study lends itself more easily toward diagnostic technologies rather than basic etiological studies[20], thus emphasizing risk factors and capitalizing on preventative measures. Considering the potential for substantial profit, some like researchers Robert Mitchell and Catherine Waldby argue that because biobanks enroll large numbers of the national population as productive participants, whom allow their bodies and prospective medical histories to create a resource with commercial potential, their contribution should be seen as a form of "clinical labor," and therefore participants should also benefit economically.[18]

Biobanks by their nature store specimens from human bodies. There have been cases when the ownership of stored specimens has been in dispute and taken to court. Here are some examples of such cases:

Some examples of organizations which have participated in creating written guidelines about biobanking include the World Medical Association, Council for International Organizations of Medical Sciences, Council of Europe, Human Genome Organisation, World Health Organization, and UNESCO.[9]