Journal:Diagnostic time in digital pathology: A comparative study on 400 cases

Materials and methods: One senior staff pathologist reported 400 consecutive cases in histology, nongynecological, and fine needle aspiration cytology (20 sessions, 20 cases/session), over 4 weeks. Complex, difficult, and rare cases were excluded from the study to reduce the bias. A primary diagnosis was digital, followed by traditional microscopy, six months later, with only request forms available for both. Microscopic slides were scanned at ×20, digital images accessed through the fully integrated laboratory information management system (LIMS) and viewed in the image viewer on double 23” displays. A median broadband speed was 299 Mbps. A diagnostic time was measured from the point slides were made available to the point diagnosis was made or additional investigations were deemed necessary, recorded independently in minutes/session and compared.

Conclusions: A diagnostic time in digital pathology can be shorter than traditional microscopy in the routine diagnostic setting, with adequate and stable network speeds, fully integrated LIMS and double displays as default parameters. This also related to better ergonomics, larger viewing field, and absence of physical slide handling, with effects on both diagnostic and nondiagnostic time. Differences with previous studies included a design, image size, number of cases, specimen type, network speed, and participant's level of confidence and experience in digital reporting. Further advancements in working stations and gained experience in digital reporting are expected to improve diagnostic time and widen routine applications of digital pathology.

Numerous validation studies in digital pathology confirmed its value as a diagnostic tool.[1][2][3] Main advantages for wider implementation of digital pathology, in comparison to traditional microscopy, include better ergonomics, immediate access to slides, and distance reporting. However, a longer time to diagnosis than traditional microscopy has been seen as a significant barrier to the routine use of digital pathology, especially in early studies.[4] Advances in working stations led to the narrowing or equaling of the diagnostic time gap and further improvements of the digital diagnostic experience, in experimental studies on a limited number of cases.[5][6][7][8] As a part of our validation study, we compared digital and microscopic diagnostic time in the routine diagnostic setting. Technical issues were seen as potential obstacles and shortened turnaround, through the faster digital diagnostic time, desired benefits.

Complex, difficult, and rare cases were excluded from the study to reduce the bias, as pathologists often remember those cases for a long time. This group nevertheless included one complex, one difficult, and two rare cases. A primary diagnosis was digital, used for clinical management, followed by traditional microscopy, six months later. Only request forms were available for both primary and secondary diagnosis. Microscopic slides were prepared by standard techniques and routinely stained hematoxylin-eosin. In addition, upper gastrointestinal diagnostic biopsies were stained Alcian blue/periodic acid-Schiff and liver core biopsies Masson trichrome/iron/reticulin, respectively. Cytological slides were routinely stained either Romanowsky or Romanowsky/Papanicolaou and were not prescreened. Microscopic slides were scanned at ×20 using Scan Scope AT Turbo digital scanner (Leica). Digital images were accessed through the fully integrated laboratory information management system (LIMS) SymPathy (Tieto) and viewed in ImageScope (Leica) on a desktop PC with double displays [Table 1] using a broadband connection [Table 2].

A microscopic diagnosis was made on an Eclipse 80i light microscope (Nikon). Turnaround refers in this study to diagnostic (slide evaluation) and nondiagnostic time (dictation, sign off, access to clinical information, and previous history, etc.). A diagnostic time was measured from the point slides were made available to the point diagnosis was made or additional investigations were deemed necessary, recorded independently in minutes/session and compared. It did not include interruptions into the reporting sessions. An unstructured sessional log was recorded to identify factors contributing to improved diagnostic time. Broadband speeds were automatically recorded every 30 min into digital reporting sessions and analyzed. 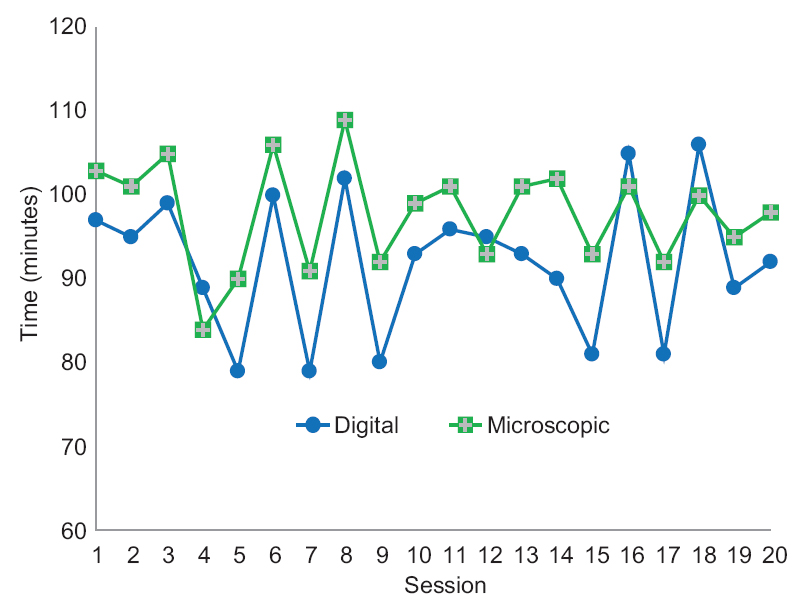 The diagnostic time was similar in three sessions. Data analysis from the unstructured sessional log identified factors contributing most to the shorter digital diagnostic time [Table 5]. Differences with previous studies are listed in [Table 6].

Although numerous validation studies in digital pathology confirmed its value as a diagnostic tool, a longer time to diagnosis than traditional microscopy has been seen as the main obstacle to wider implementation of primary digital diagnostics. Early works showed up to 60% longer time to diagnosis in digital pathology comparing to traditional microscopy.[4] Recent advances in digital working stations have shown slightly longer or similar digital diagnostic time to traditional microscopy in experimental studies on a limited number of cases or slides, involving though multiple pathologists. A high-resolution array of 28 computer screens allowed, after just a few minutes familiarization, tasks to be performed as quickly and confidently as a microscope.[5]

Assessing the effect of display resolution, Randell et al. showed that time to diagnosis and time to first target were faster on the microscope than on the single and three-screen displays, viewing axillary lymph node slides.[6] Although there was no significant difference between the microscope and the three-screen display in time to first target, the time taken on the single-screen display was significantly higher than that on the microscope. The results suggested that a digital pathology workstation with an increased number of pixels may allow the quicker initial slide overview, however, in the case of a detailed slide search, increased resolution may not offer any additional benefits. Double 23” displays have been used in our study, one for LIMS and the other for image viewer, seen as a minimal requirement. In our validation of digital pathology, we have tested multiple displays available on the market, including ultra-high definition (4K), and purchased the ones mentioned above as the best value for money and benefits to digital diagnostics.[9]

In their further studies, Randell et al. achieved a similar time to diagnosis for the conventional and virtual microscope. Although the mean slide viewing time was also similar, participants spent a significantly greater proportion of the total task time viewing slides and revisited slides more often, or there was a significant difference in the mean magnification used between the two technologies, with participants working at a higher level of magnification on the virtual microscope.[7][8] This may be related to the level of confidence and experience in digital reporting, and was not observed by the reporting pathologist in this study.

More exact comparison of results was found to be limited due to differences with previous studies in design, image size, network speed, case number, case workload, and experience in digital reporting, all affecting digital diagnostic time [Table 6]. Similar to previous studies, multiple displays were seen as an advantage in our study as well. In contrast, our study was conducted in the routine diagnostic setting with a varied case workload and high case numbers. In addition to the wash-out period of 6 months, those are seen as strengths of this study. As adoption of primary digital reporting relays on individual preferences and learning curves for each pathologist, a number of participating pathologists has not been seen as an issue in this study.

A shorter digital diagnostic time in our study has been achieved in the routine diagnostic setting with stable and adequate network speeds, full integration of digital scanner with LIMS and double displays as default parameters. As previously shown, an instant upload of digital images in the image viewer has been achieved at 20 Mbps.[9] Average, median and variation of download and upload network speeds were both well above and accordingly regarded as stable. Correlations between digital and microscopic diagnosis were 99% for the reporting pathologist (unpublished data) and therefore not specifically addressed in this study. One percent of cases (six) showed a minor discordance (without clinical implications), with no cases showing a major discordance (with clinical implications) in that study, which was fully compliant to the College of American Pathologists recommendation.[10]

Improvements in digital diagnostic time also related to better ergonomics, larger viewing field, and absence of physical slide handling. Better ergonomics in the digital reporting setting, with less eye and wrist fatigue, has been recognized as an important advantage comparing to traditional microscopy, allowing longer uninterrupted diagnostic sessions to be carried out.[2][9] Larger viewing field allowed completion of slide viewing in lesser number of fields, subject to magnifications used, for both small diagnostic biopsies, and large resections specimens. In the absence of physical slide handling, switching between slides and magnifications was nearly instant and superior to the traditional microscopy, as the focus was maintained throughout. The need for double checking of slides against request forms by pathologist has almost completely disappeared, as only digital slides belonging to the patient could be linked to the patient in LIMS. A number of specimens per sample could be still simultaneously checked by pathologist against digital slides as double displays were used, one for the LIMS and the other for viewing of digital slides.

Slide viewing patterns among pathologist with long experience in the digital review have been recently studied.[11] Combinations of directed and cover panning with dip-zooming were also experienced in this study as superior to traditional microscopy. That especially goes for chipping specimens from, for example, prostate, urinary bladder, or endometrium. The whole slide could be viewed at lower magnification in one field and dip-zoomed to the area of interest. The other advantage, comparing to traditional microscopy, is that images appear in the viewer fit to window at magnifications up to ×4, depending on the specimen size. That often allowed an instant diagnosis in the very first viewing field for smaller biopsies, shortening diagnostic time substantially.

An average digital and microscopic diagnostic time in cytology was similar in this study. A majority of specimens were prepared using liquid-based cytology techniques with remaining traditional smears being done by pathologists. This way we were able to ascertain a high quality of slides with limited areas to scan and evaluate, contributing to the effective digital diagnostics and minimizing scanning issues. The routine use of a scanning magnification ×20 and a digital zoom to achieve ×40 caused no issues in this study.

Four sessions with a shorter microscopic diagnostic time included more gastric, lung, and lymph node biopsies comparing to the rest of the sessions. Those required more extensive use of magnifications ×40 due to low bacterial or tumor loads and to ascertain nuclear features. Although all cases in this group were reported using a digital zoom to achieve magnifications ×40, it took a longer time to make a confident diagnosis due to digital zoom's focusing imperfections. As a result of this study, we are considering to routinely scan all minute diagnostic biopsies with queries of malignancy at ×40 instead.

Digital reporting systems allow today multiple advances in working settings comparing to the traditional microscopy. It is up to individual pathologists to discover their own ways to take the advantage of this new working environment to the benefit of the patient and hospital budget.

A shorter diagnostic time in digital pathology comparing with traditional microscopy can be achieved in the routine diagnostic setting with adequate and stable network speeds, fully integrated LIMS and double displays as default parameters, in addition to better ergonomics, larger viewing field, and absence of physical slide handling, with effects on the both diagnostic and nondiagnostic time. Further advancements in working stations and gained experience in digital reporting are expected to improve the diagnostic time and widen applications of digital pathology.

This study was supported by Digital Pathology Project at our institution, sponsored by the Health Authority-West (Helse vest), project number 795421. The author is grateful to the departmental laboratory staff for their support and encouragement, as well as members of the project group and the regional IT Department (HVIKT) for their valuable contributions to the success of our digital pathology project.