Difference between revisions of "Journal:Data and metadata brokering – Theory and practice from the BCube Project" 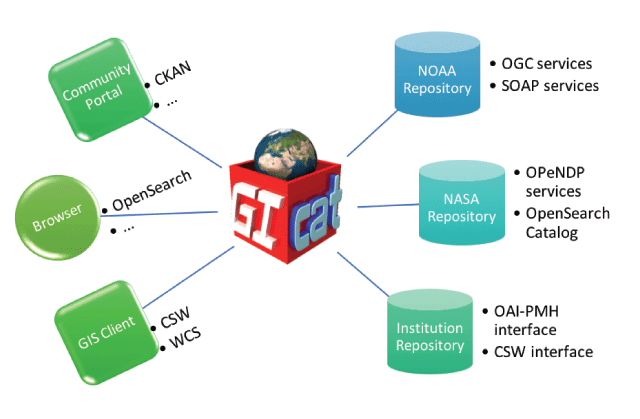 People and autonomous agents find resources, by which we mean data, models, computational services and the like, through the encoded information describing those resources, i.e., metadata. Metadata should also describe how resources are structured and accessed. In brokering a resource, the broker must first access and translate the available metadata and map it to a common internal data model. To serve a metadata record in response to a request the broker maps from the internal model to the model conforming to the protocol consistent with the request.

Unlike the unstructured metadata that supports free text queries used with general search engines, metadata that has been mapped to a common data model enables search by specific features of the data such as its temporal coverage and spatial extent.

The BCube Brokering Framework was already equipped to understand many common protocols and metadata standards, such as OAI-PMH and OGC's CSW. For some of the services required by the science scenarios, however, a one-time manual mapping was required when the metadata model of resource was not already known to broker. The internal data model of the broker is based on the ISO 19115 family of metadata standards, but is extensible to accommodate unique community requirements. A basic form of semantic mediation was possible with the BCube broker through augmentation of terms in keyword searches (Santoro et al., 2012).