Difference between revisions of "Journal:Timely delivery of laboratory efficiency information, Part II: Assessing the impact of a turnaround time dashboard at a high-volume laboratory"

Objectives: The objective of our study was to demonstrate increased efficiency achieved by using an interactive TAT dashboard.

Methods: A retrospective descriptive study design was used. Creatinine TAT outcomes were reported over 122 weeks from a high-volume laboratory in Gauteng, South Africa. The percentage of within cutoff and 75th percentile TAT were analyzed and reported using Microsoft Excel. A focus group session was used to populate a cause and effect diagram.

Conclusion: Our study demonstrated that the use of an interactive TAT dashboard, coupled with good management, can dramatically improve TAT and efficiency in a high-volume laboratory.

Turnaround time (TAT) is an important performance indicator of a laboratory's efficiency in delivering patient results.[1] In the South African National Health Laboratory Services, ad hoc mean TAT reports were previously produced for laboratory managers. These TAT reports assessed performance based on the National Health Laboratory Service global annual performance plan (APP) TAT cutoffs specific to individual tests.[2] Reports were provided intermittently in a static form that assessed central tendency only (i.e., the tail size was not reported) and did not allow for drilling down to access additional, more detailed information to direct meaningful corrective action (i.e., laboratory or sample-level TAT breakdown). To improve on these TAT reporting systems, Coetzee et al. used three additional measures to assess TAT efficiency: (1) median TAT, (2) 75th percentile TAT (tail size), and (3) percentage of within cutoff TAT.[3] These measures accurately assessed outliers as tail size and could be used by laboratories to address workflow issues and identify testing delays for intervention. "Tail size" refers to the volume of samples in a positively skewed data distribution that has a long tail to the right. These samples often have a much higher TAT value than the central tendency (median) for this data distribution. Tail size can be measured as the percentage of samples that exceed a defined TAT cutoff in hours, or as a percentile.

Initially, the three measures described above were reported in Microsoft Excel (Redmond, Washington, United States) worksheet format from August 2016 to June 2017.[4] Thereafter, from July 2017, an interactive dashboard was developed that reported TAT data for a basket of tests using the Microstrategy Desktop (Tysons, Virginia, United States) analytics tool.[5] The previous static reports and the more recent interactive dashboard reports have seen distribution to area (province), business (district), and laboratory managers. Data can now be reviewed in the interactive dashboard reports across the provincial, district or laboratory levels through drill-down functionality, which makes it possible to slice through a data hierarchy to reveal additional details[6] contained within the aggregated data. In this way, TAT data presented can be visualized at the national, provincial, and laboratory level on the same dashboard page. The approach allows various levels of manager to drill down from a "bird’s-eye" view of TAT performance nationally, down to the provincial or individual laboratory level.

Within the dashboard, TAT can be viewed for a basket of tests, including:

Proxy marker analytes are used to assess performance of the respective matched assay panel; for example, creatinine is used as the proxy test to review urea and electrolytes performance. Each test has its own predetermined TAT determined at the local level according to the level of care, with absolute national APP cutoffs noted.

Global TAT outcomes for each test are reported according to specifically stipulated, organization-determined TAT APP at the national level and are described elsewhere.[2][7] National APP cutoffs are set bearing in mind the multi-tiered service that accommodates reporting from primary health care referral to large tertiary centers that may offer emergency services, and do not necessarily reflect the respective individual, laboratory-stipulated TAT, which may be self-determined by laboratories based on their local clinical needs.

Armed with the knowledge of TAT and which tests are identified as poor performers in the interactive dashboard, laboratory managers can identify and address areas of concern through review of the contributing causes.[8] This is achieved through root cause analysis, a method of problem solving used to identify the root causes (faults or problems) and determine the most probable underlying causes of error.[8] The ultimate aim of root cause analysis in TAT monitoring is to formulate corrective actions that either mitigate or eliminate the identified causes in order to return TAT efficiency and performance to acceptable levels.

The aim of this study was to report on the impact of an interactive dashboard that provides weekly information about TAT and enables laboratory and senior managers to monitor TAT, as well as identify problematic areas for corrective action. The hypothesis was that an interactive TAT dashboard delivering week-by-week information about laboratory TAT provides the impetus for continuous service review and implementation of appropriate corrective action, where required, to ensure the timeliness of laboratory reporting. Data are presented from a single busy, routinely automated clinical pathology laboratory at a large regional hospital to reveal how the described TAT dashboard served to continually highlight ongoing TAT delays for urea and electrolyte (creatinine) result reporting and, ultimately, facilitated sustained corrective action.

Ethics clearance was obtained from the University of the Witwatersrand (study approval number: M1706108). No patient identifiers were extracted with data.

A retrospective descriptive study design was used to analyze laboratory data and highlight the impact of interventions by observing trends. Qualitative focus group sessions were used to unpack the root causes of poor performance. Convenience sampling was used. For the purpose of this study, the TAT performance for creatinine testing, which had poor TAT at the start of the study, was used to demonstrate how dashboard monitoring of TAT could highlight and impact the TAT. Creatinine testing outcomes were reported with an APP cutoff of 90% within five hours.[2] Weekly TAT data—from the week August 1, 2016 to August 7, 2016 (week one), through to the week November 26, 2018 to December 2, 2018 (week 122)—was reviewed.

All TAT 75th percentile values were reported in hours. Each week was numbered, that is, 1–122. TAT data refer to total TAT (i.e., time of first registration to time of result release after review) if not otherwise specified for TAT components. All data were prepared and analyzed using Microsoft Excel (Redmond, Washington, United States).[4] The testing TAT time interval was calculated from time of registration in the testing laboratory to time of result generation on the analyzer interface. Review TAT (labeled TST-TO-RVW [test-to-review]) is the time taken by a senior technologist to review the patients’ results on the laboratory information system (LIS), making sure all quality checks were adequately performed before releasing (authorizing) the patients report. The recorded time interval, that is, the review TAT, was calculated afterwards for each individual sample outcome, from the time of result generation to the time of authorization or review.

The percentage of within cutoff TAT was calculated as the total number of samples meeting the organization’s TAT cutoff criteria of five hours for urea and electrolytes testing divided by the total number of tests performed, expressed as a percentage, per week. The results were reported as a line chart (indicating the week number and APP cutoff of 90%). Data were segmented into three phases: (1) baseline: week 1 to 44 (week ending June 4, 2017); (2) dashboard intervention: week 45 to 63 (week ending October 15, 2017); and (3) post-intervention from week 64 to 122 (week ending December 2, 2018). The dashboard intervention period indicates the switch from using an Excel worksheet to the interactive dashboard.

The 75th percentile was calculated for total TAT per week, as well as for TAT components, that is, testing and review. As tests were based out of a local hospital and not referred from surrounding laboratories, the pre-analytical TAT component was not applicable. When samples are referred, the pre-analytical TAT measures the interval (time taken to transport the sample between laboratories) from registration at the source (the laboratory where the sample was received) to the testing laboratory. Results from this analysis were plotted as 75th percentile, per testing week, for both total and component TAT.

A root cause or Ishikawa analysis diagram was used to identify potential factors causing poor TAT performance.[9] Causes were grouped into the following headings: (1) equipment and supplies; (2) environmental; (3) rules, policies, or procedures; and (4) staff or personnel. Focus group meetings were arranged with the laboratory manager and section supervisors to identify causes and to populate the cause-and-effect diagram. A voice recorder was used to create the cause-and-effect diagram using Microsoft Visio (Redmond, Washington, United States).[4] 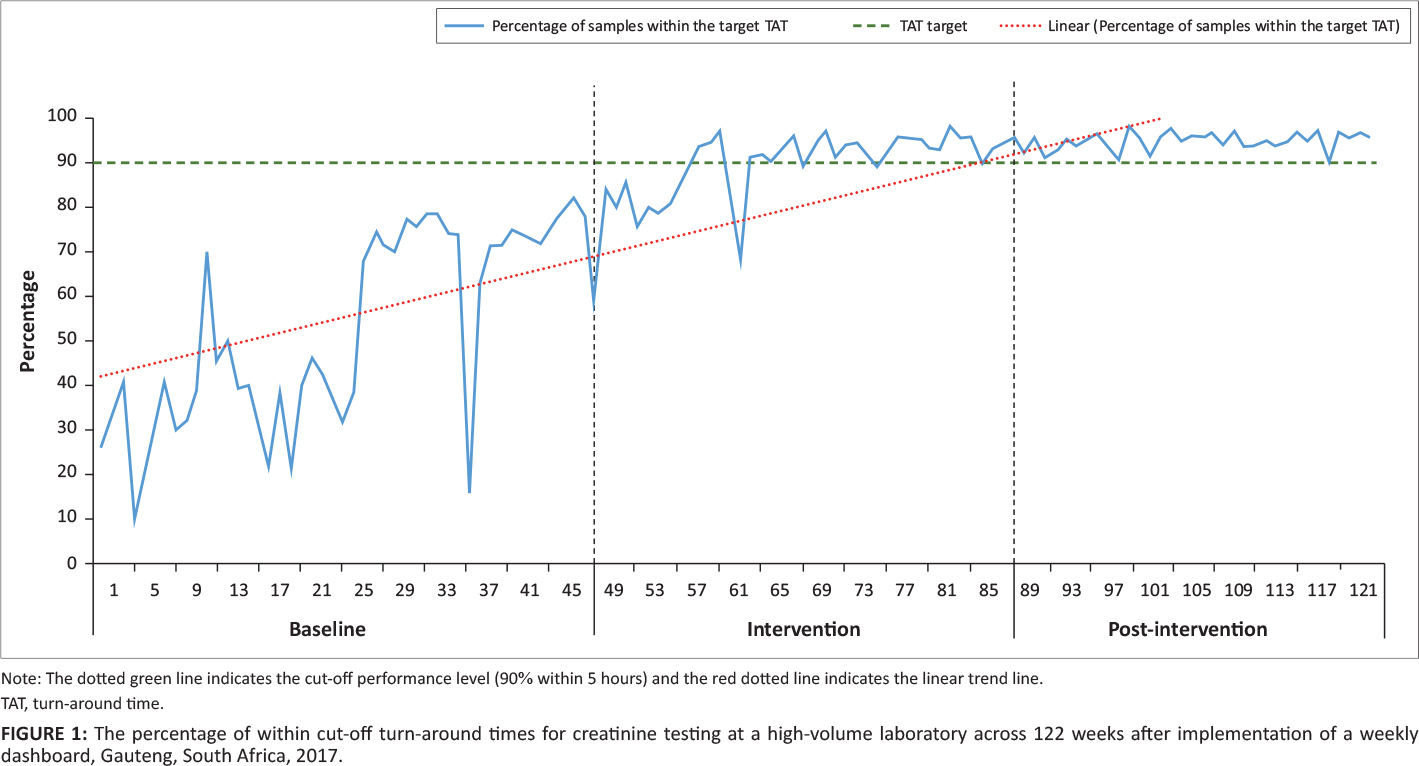 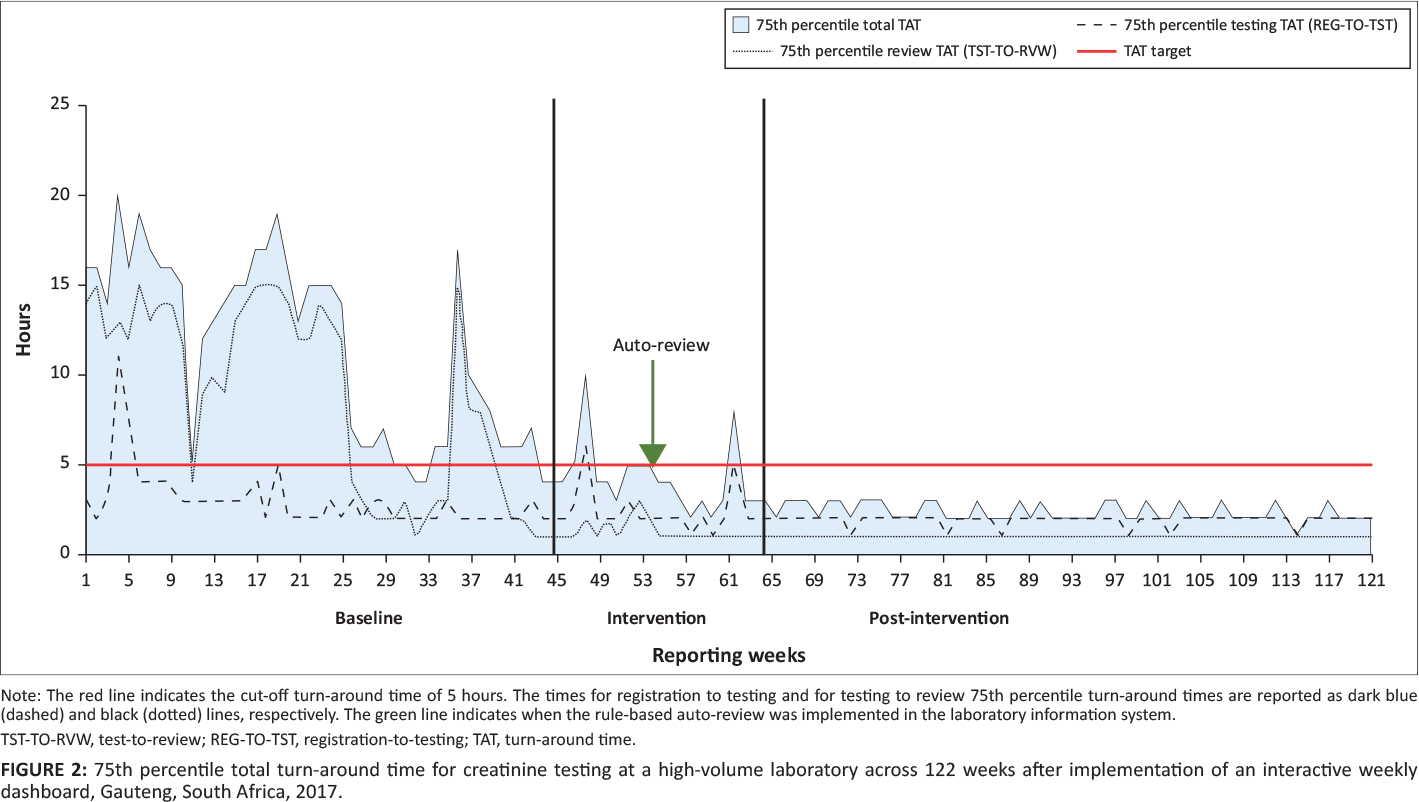 Four major clusters of contributing causes were identified in the root cause analysis, including equipment and supplies; environmental causes; rules, policies, and procedural causes; and staff and personnel factors (Figure 3).

With respect to equipment and supplies, the following causes were shown to have negatively impacted TAT: (1) migration to the new platform (phased approach), (2) difficulties with procurement of laptops to facilitate after-hours off-site authorization, (3) power outages, (4) LIS bandwidth challenges, (5) LIS upgrades, and (6) reagent or stock procurement.

Insufficient air conditioning and water leaks from the ceiling were highlighted as causative environmental factors.

Problems related to rules, policies, and procedures included (1) middleware having to be configured, tested, and amended due to the changes brought about by a phased approach, and (2) a substantial workload being transferred from a nearby laboratory without provision of additional testing or staffing capacity.

For staff and personnel considerations, the following were identified: (1) after-hours authorization delay (by pathologists); (2) industrial action leading to delays; (3) paediatric and low-volume samples requiring manual processing, causing bottlenecks in the workflow; (4) staff constraints (in terms of insufficient staff to manage the benches); (5) additional training of staff being required for new procedures and processes for the platform testing changes implemented; (6) first-line manual sample preparation being needed to enable sample testing prior to full automation; and (7) training for the new platforms provided occurring on-site, while at the same time staff were also required to attend training off-site, leaving benches poorly staffed during training periods. 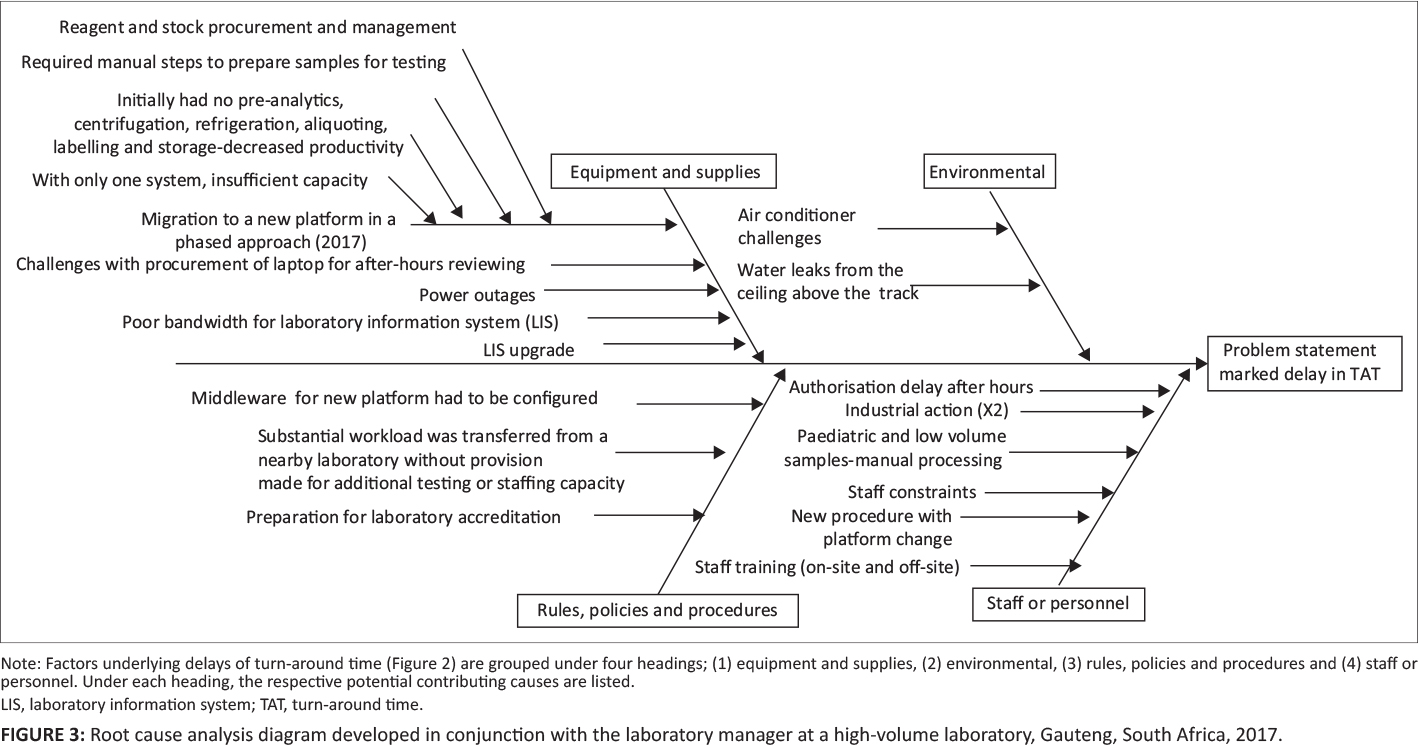 This presentation is faithful to the original, with only a few minor changes to presentation. Grammar was cleaned up for smoother reading. In some cases important information was missing from the references, and that information was added. The original citation number two (2017-2018 NHLS Annual Report) was dead; an alternately hosted version was found and used for this version. The original cites Wikipedia concerning the Ishikawa diagram; as using Wikipedia as a citation is generally frowned upon, a substitute citation for Ishikawa's original Guide to Quality Control was used for this version.